Unfortunately, scammers go where people are, and Reddit’s popularity and features, such as user anonymity, the ability to create fake subreddits, and edit messages, make Reddit attractive to scammers and unscrupulous actors.

Reddit is, at its core, a community-centric social sharing platform. Users (also known as Redditors) upload content they find interesting (such as news, images, or videos), and the community, as a whole, votes on the best submissions. The most popular and upvoted posts across all of Reddit appear on the website’s front page, while less popular posts are downvoted.

Reddit is made up of thousands of smaller groups or communities known as subreddits. A “subreddit” is a forum devoted to a community that is interested in a particular concept or topic. Each of these subreddits begins with reddit.com/r/ as the base of their URL but then expands from there.

Founded in 2005, Reddit has grown over the years to become the 5th most popular social media platform in the world, with over 1.5 billion users, among whom hide scammers.

Although Reddit has very strict policies and thousands of moderators, its large user base and lack of a specific anti-scam policy can make it difficult to fight against fraudsters.

Reddit scams often take place off of the app itself. Scammers focus on getting users off the platform, through means like business impersonation. In some cases, they redirect their victims to third-party websites where they can drain them of their funds.

Scammers use Reddit primarily because it is free, simple, and easy to use.

Scams on Reddit can range from lone messaging bots sending malware via private messages to entire subreddits dedicated to pulling off sophisticated frauds.

Here are some examples of how Reddit scams work.

Phishing scams are common on most social media platforms, and Reddit is no exception.

Reddit scammers (while impersonating businesses or key figures) write urgent and enticing messages containing a shady link to a third-party website. After clicking, users are then taken to a page that, among other things, downloads malware onto their computer which ultimately steals their personal information.

As a rule of thumb, general users on Reddit should be suspicious of any unsolicited private message that comes out of the blue, especially those containing a link to a third-party website. If you are not sure of the source, do not click.

However, for business owners, you can monitor accounts that scammers may be using to fool Reddit users by searching for account names that contain any of your trademarks or slogans. While this method requires a rather significant manual effort if done by hand, businesses can actually rely on impersonation removal software, like Red Points’, which can automate this monitoring for them.

One of Reddit’s most attractive features is the ability to find and join communities (subreddits) built around any particular topic of interest to you.

Unfortunately, many Reddit scammers take advantage of this feature to build fake subreddits, often moderated by scammers themselves.

The aim is to lull victims into a false sense of security by providing them with a false sense of trustworthiness. These subreddits are often filled with fake posts and comments, all in the bid to appear legit.

The ultimate aim of these fake subreddits is fraud. Often, the plan is to trick victims into clicking on questionable links containing malware or into voluntarily giving up their personal information and passwords.

Reddit is well known for having malicious fashion replica communities. While some con artists ensure their victims know exactly what they are getting themselves into, others will pose as well-known brands to peddle knockoff goods while saying they are the real deal.

Neither of these situations benefits the original brand and can be extremely damaging to a company’s standing in the marketplace.

Reddit is a very community-centric platform with dedicated active users. Scammers are often expelled from the subreddit where they perpetrated their act of fraud when caught and can be given a lifetime ban from Reddit in some cases.

The Reddit community has an active subreddit named the Universal Scammer list with the usernames of exposed fraudsters and  Redditors reported for suspicious fraud-like activity.

Before buying anything or clicking any third-party link, it would be clever to check out the username of the person you wish to transact with, no matter how genuine or trustworthy the user sounds.

While having a new account on its own is not a crime, most online fraudsters often create dozens of new profiles without any baggage solely to scam Redditors.

Be very suspicious of new Reddit accounts offering fantastic deals. More likely than not, it is a scam.

Be wary of Reddit accounts that have been existing for a while but have very few comments and posts, or they’re all short or made quickly.  This could be a “dormant account” lying in wait for victims. Demand for an explanation as to why they have such few or irregular posts. If their response isn’t satisfactory, do not trade with them.

Finally, avoid offers that simply look too good to be true. If someone approaches you with the promise of fantastic rewards for doing very little work or nothing at all, you’re probably being set up for a scam.

Reddit was not created to facilitate commerce and bears no responsibility for any business transaction users engage in through the platform. In a 2017 Reddit policy update on transactions, the site said:

“When considering a gift or transaction of goods or services not prohibited by this policy, keep in mind that Reddit is not intended to be used as a marketplace and takes no responsibility for any transactions individual users might decide to undertake in spite of this. Always remember: you are dealing with strangers on the internet.”

Nevertheless, you can report scammers impersonating your business on Reddit in a variety of ways. Here is how to go about it :

Business impersonation scams on social media are among the worst types of scams targeting businesses. These scams can not only lead to a loss of revenue, they can also damage the reputation a business has with prospective customers.

Use Red Points’ Impersonation Removal tools to stop scammers posing as your brand! 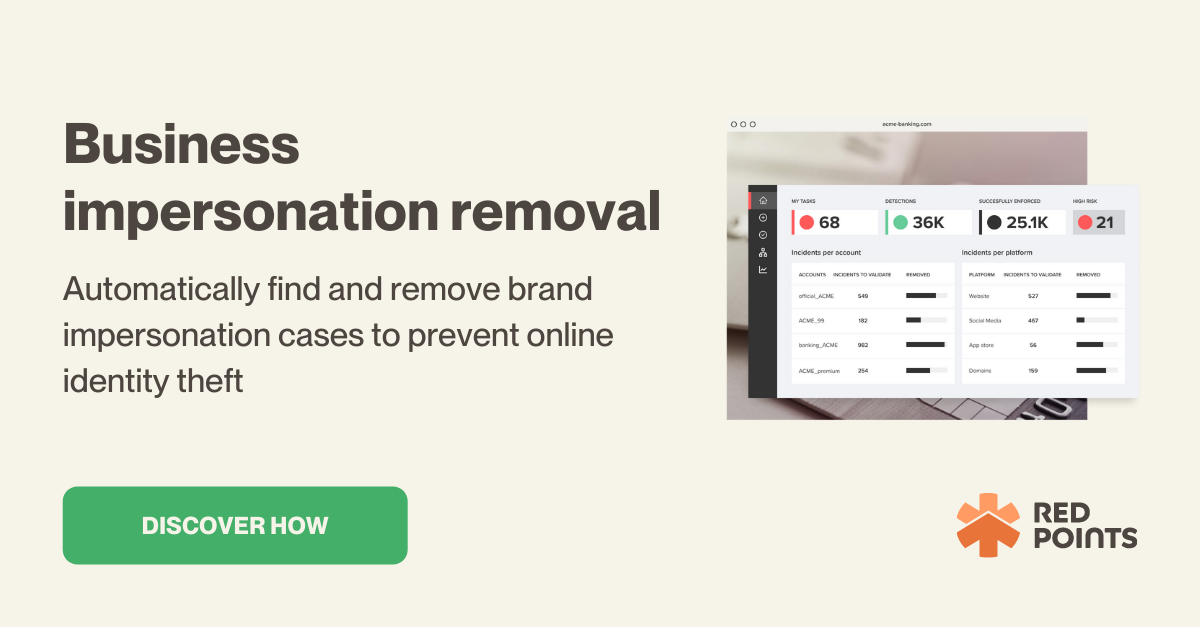 Ogunwale Emmanuel is an experienced writer for cybersecurity and blockchain companies. He is a data-driven nerd focused on creating accurate, accessible, and concise content for growth-driven organizations.
More about this author

While Reddit may not have the best reputation in some circles, it is mostly made…

For those of us that are familiar with Reddit, we know it as a place…