What is app piracy and how can you stop it?

FIND THE RIGHT PIRACY PROTECTION PLAN AVAILABLE FOR YOU

An increase in app piracy has become one of the biggest challenges of the mobile app industry. Mobile apps that take years to develop and perfect are instantly copied by hackers and scammers. The mobile app companies in turn end up losing millions, sometimes, billions of dollars in revenue as a result of their apps being pirated. Moreover, app piracy can also severely impact brand reputation.

In fact, according to a report by Tapcore, pirated mobile apps have led to a $17.5 billion revenue loss from major mobile app publishers in the last five years.

What is app piracy?

App piracy refers to the illegal distribution and/or modification of apps by someone other than the rights owner of the application. App pirates can take the original app code, remove tracking, advertising, and attribution functionalities, and then republish the app with their own monetization to make quick money.

While most pirates get the apps from official platforms like App Stores and Google Play, others steal apps from third-party app stores which aren’t as popular. Since Google Play cannot operate in China, many scammers also copy apps from Chinese app platforms and publish them as their own on Google Play.

How is app piracy impacting businesses?

There is a lot of potential advertising revenue up for grabs in app piracy. In the case of freemium apps that make sales through in-app purchases, there is a lot of revenue the could be diverted.

While some pirates may try to pass an app as their own, others just offer the original app for free on a third-party app and make money through ads. Pirates insert ads from an advertising network that pays them and not the official owners of the app and then just sit back to ride off someone else’s success.

When it comes to free apps, users may not know they have downloaded a pirated version. However, with premium apps where users have to pay upfront to download the app, over 95 percent of the installs are pirated–meaning most users know the apps are pirated, but they download it for free to save money.

It’s also important to note that the majority of the most pirated apps aren’t games, but big mobile games tend to give more revenue to pirates. For instance, Subway Surfers, a popular mobile game, has lost over $91 million due to piracy and Grand Theft Auto has lost over $76 million.

Types of app piracy you need to know

Counterfeiting of applications refers to illegally duplicating and selling mobile apps without the permission of the official owners. The app can be sold at a discounted price as compared to the original one or it can be made available for free just so pirates can make money through ads.

This occurs when pirates try to impersonate the mobile publishing company and pass the pirated app as the original one. While this can be done through duplication, it is mostly done by hacking the app and the server it is connected to.

Once the app is successfully hacked, pirates gain access to the original code and change it at the backend to redirect the revenue back to them instead of the main owners of the app.

In some instances, pirates can also use app impersonation to steal user data and sell it off for profit.

How can you protect your app from piracy?

You can protect your mobile application through software intellectual property registration to ensure even if someone tries to copy your app, you can legally shut them down and file a case against them as well. Both App Store and Google Play Store take IP infringements very seriously. You can report a fake application on the platform to get it taken off.

Obfuscation refers to the technique of making your source code unintelligible to most people. With the help of obfuscation techniques like data masking, tokenization, and encryption, you can transform your code into another form in order to protect your IP and other sensitive company information.

While it’s not a foolproof method and hackers can end up decrypting the code, it’s still an important measure that most developers take and it’s usually combined with other techniques to improve app security.

Pirates and hackers often make changes to an app’s source code in order to bypass licensing codes, add advertisements of their own, or disable security monitoring.

Tamper proofing means protecting your app against any kind of changes or reverse engineering. So if a hacker tries to change any part of the original app source code, the whole program will either shut down or malfunction.

Monitor and take down pirated apps

While you can take proactive measures to decrease the chances of your apps getting pirated, it still does not provide complete protection. There is always a chance that hackers can get around the security measures and pirate your app.

As a result, it is just as important to continuously monitor all the major app marketplaces to ensure nobody is trying to infringe on your app’s intellectual property.

Red Points makes this entire process easier by automatically detecting and removing fraud apps. It can identify impersonated apps and fake apps with malware circulating with your brand name. With the help of Red Points, you can effectively protect your reputation, revenue, and customer loyalty.

It can take several months to even years to build the perfect mobile app that aligns with your business vision and target audience. When it’s finally time to reap benefits, it would be a shame to lose all that hard-earned revenue to app pirates.

Therefore, it’s important to not only understand the consequences of app piracy but also how you can effectively prevent it. 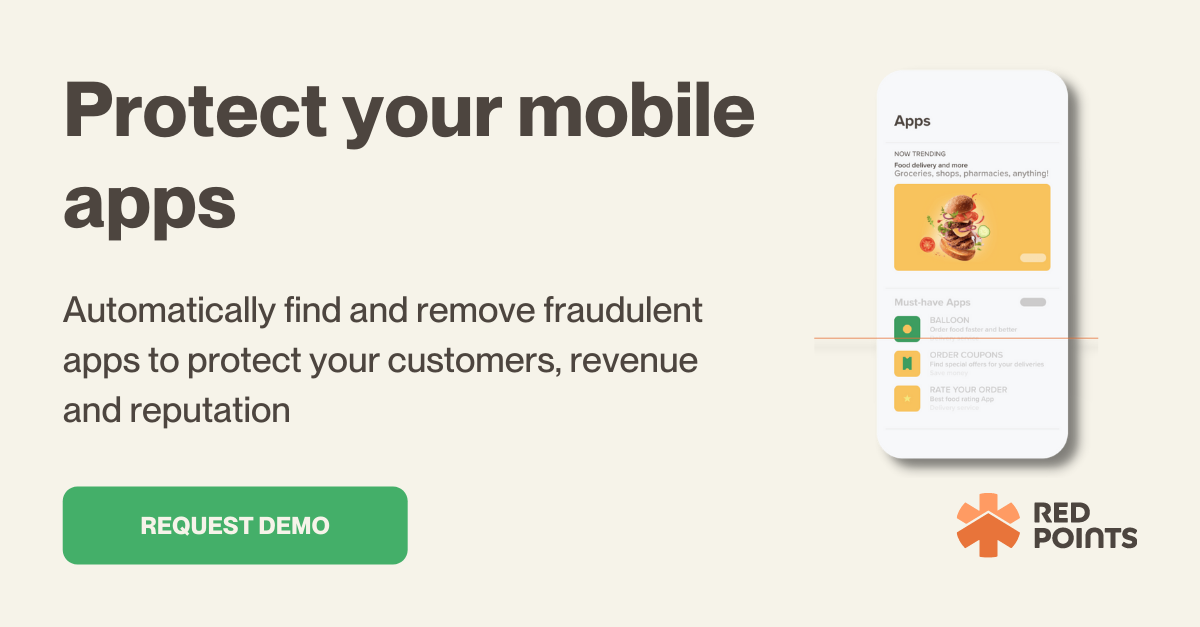 Ritika is an experienced writer specializing in technology, SaaS B2B, and digital marketing. Additionally, she focuses on protecting brands through social media and online brand awareness.
More about this author

Google Play Store has been plagued with fake mobile apps for many years.  In September…

Social media has tremendously amplified the options for ecommerce and brand owners to conduct business.…