Credential sharing and what it means for businesses

CHECK OUT THE CREDENTIAL DEFENSE PLAN AVAILABLE FOR YOU

There is a wide variety of website credential sharing services available. Some services claim to allow user credentials to be shared free of charge while other services require the user to pay for downloading the credentials in order to access over-the-top (OTT) platforms.

OTT subscription on the rise

Over the past months, home confinement has led to a spike in television consumption hours, video consumption rates, as well as an increase in access to video platforms such as YouTube.

The pandemic has also digitized a large segment of the population who, prior to confinement, was unfamiliar with new technologies, social networks, online content consumption and video calls.

A recent study conducted by Nielsen in the United States shows not only the increase in streaming minutes consumed but also how new age groups have been impacted by this new trend.

What is credential sharing?

Is your business subscription-based? Learn the 10 new trends you need to watch in 2021

In its user agreement, each platform explicitly defines what can and cannot be done. Though most people don’t tend to read it, this document outlines whether a user can share credentials with a family member, for example.

It also specifies the prohibition to sell access to the platform to third parties. Though most people may share their credentials with friends and family members, it can also be done maliciously. This is when credentials are stolen and sold on marketplaces or given away on social networks, for example.

Generally speaking, there are two types of credential sharing:

This is when someone shares credentials with friends and family, and generally does so without any economic exchange and without the purpose of earning money. Usually it is done within the immediate family group. This type of “credential sharing” is well regarded or socially accepted.

In many cases, the credentials of thousands of users are exchanged with the explicit aim of generating income from their sale and/or distribution. Passwords are then sold on marketplaces at a much lower price than the monthly subscription cost. The descriptions often offer guarantees and lifetime credentials.

To avoid negative comments in the offer listing, contact telephone numbers or email addresses are listed. This type of “credential sharing” directly violates the terms and conditions of the service that every user agrees to when signing up and starting the subscription.

The entire digital ecosystem, ranging from social networks, video platforms, to  marketplaces, implements their own policies in order to report this type of infringement. This ensure they can be taken down and the economic damage to the rights owners can be avoided.

However, the burden remains on the right holders to identify these infringing cases across the internet. Red Points’ expertise in the anti-piracy space coupled with our state-of-the-art detection and enforcement technology makes it possible to provide a comprehensive credential protection service.

Check our Credential Defense platform for more information on how we can automatically find and remove software or entertainment logins that are being resold online. 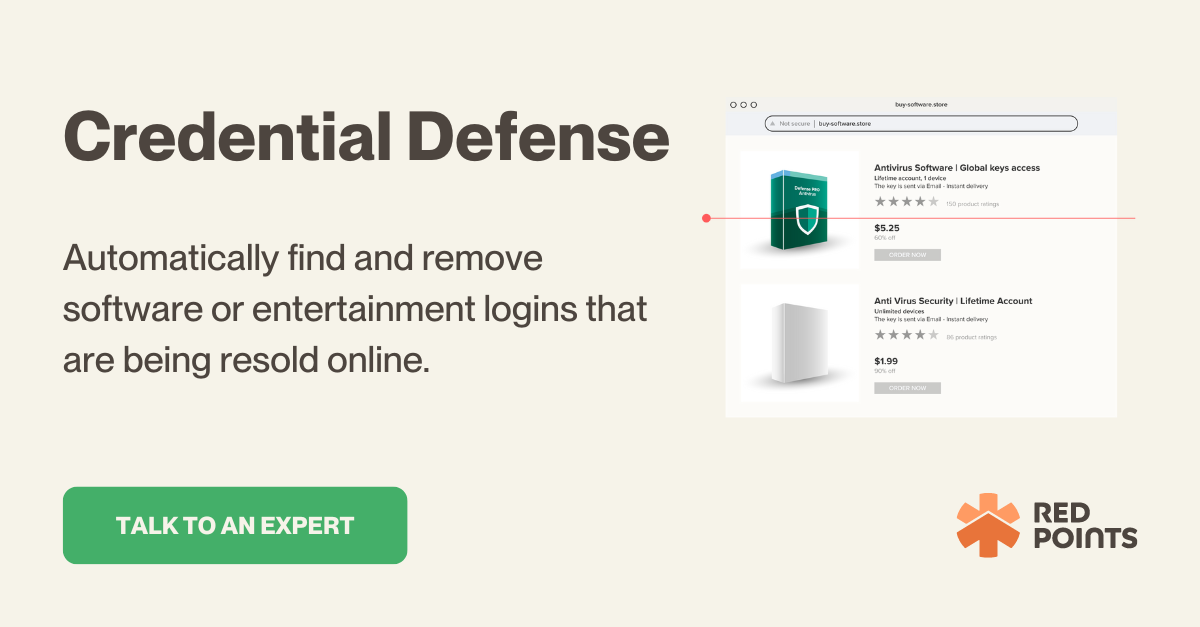 With over 20 years of experience working within the entertainment and audio-visual markets, both traditional and digital, Carlos has been leading the Anti-Piracy efforts at Red Points for the past 2 years. Carlos is passionate about media and the audio-visual market.
More about this author