SEE HOW TO AUTOMATE YOUR PATENT ENFORCEMENT ON AMAZON

Amazon is ranked as the top most popular website in the ecommerce and shopping category worldwide. Not only are users drawn to this online shopping platform because of the convenience, practicality, and innovation it offers, it cannot be denied that Amazon is what it is now because of its people. This, of course, includes Amazon’s third-party retailers, whose number has grown exponentially throughout the years, thereby contributing to the large product selection and catalog that Amazon is also very much renowned for.

With more and more consumers and third-party sellers turning to Amazon as their online marketplace of choice, there also has been a rise in different kinds of Amazon violations, including those involving intellectual property rights. Particularly, patent violations in products being sold on Amazon have become pretty common, so much so that the company is taking active measures in fighting against violations of patent rights.

In today´s article we will discuss:

What is patent infringement?

To note, patent infringement is committed only if the object involved is a patented item. An item is considered patented if it is a product that offers a technical solution to a problem, is a novel invention, and, of course, is registered as a patent with the US Patent and Trademark Office (USPTO) or its counterparts in other portions of the world.

How is patent infringement committed on Amazon?

Needless to say, patent infringement is committed on Amazon as long as any of the acts constituting patent infringement as mentioned above is carried out on the Amazon app or website. For example, if a third-party seller is caught distributing or selling a patented product on Amazon, it is considered as patent infringement on Amazon, and the latter may take the necessary steps to put an end to the infringement. This includes removing the listing, even without prior notice to the seller-infringer.

As a more specific example, one of the most common issues on Amazon that is usually flagged as patent infringement is reselling items coming from China. Presently, the trend is to purchase low-cost items in bulk from China, and then resell these items at a mark-up. Technically, this is an acceptable and lawful entrepreneurial practice, but should these items be actually infringing upon patents, which is often found to be the case, these resellers would be committing Amazon patent infringement.

It must be noted that in this case, even if they are mere retailers and not the actual manufacturers of the products, the same cannot be used as a defense to evade liability to the rightful holder/owner of the patent. To note, by the act of selling of and/or distributing an item covered by a patent, patent infringement is consummated as an offense.

How is patent infringement on Amazon reported?

Fortunately for brand owners with valid patent registrations, Amazon is a platform that puts premium on brand protection and intellectual property ownership. In fact, as pointed out in an earlier post, injured parties may report copyright and trademark infringement on Amazon. The same can be said for Amazon patent infringement.

In notifying and calling on Amazon to act on the alleged breach of patent rights, you must be able to provide the following information:

Apart from this, you can also choose to attach supporting documents such as USPTO registrations or court orders, if available. All these details are crucial in the eventual take-down process to be initiated by Amazon. If these essential particulars are lacking, Amazon might flag your claim as an illegitimate claim.

To note, Amazon receives frivolous patent infringement claims every now and then, which are usually made by dishonest sellers to target their competitors. Remember that the objective in initiating an infringement claim is to put a stop to infringement activities, not to attack innocent Amazon retailers. Thus, it is the reporter’s responsibility to provide the necessary information to build his/her legitimate claim or case.

How can patent infringement on Amazon be prevented?

Amazon patent infringement can only be successfully prevented if, in the first place, the patent holder/owner is proactive in monitoring infringing sellers. Because while Amazon takes intellectual property rights seriously by setting up these internal infringement reports and claims, it is the intellectual rights owner who should be able to monitor and detect listings that are potentially violating any of their rights as the owner or holder. Of course, patent registration is the first step, and active monitoring is what comes next to safeguard your patent rights.

Patent infringement on Amazon can be detected manually. However, it cannot be denied that manual monitoring could be tedious, costly, and time-consuming. Accurate and continuous detection is also not ensured, given the apparent limitations in doing this step manually. On this account, you can opt to avail a software that automatically does the job and does it well, such as Red Points’ Amazon Brand Protection Service.

Once a likely Amazon patent infringement has been detected, apart from reporting the incident to Amazon as discussed above, you can also choose to take matters in your own hands–a right you enjoy as an owner or holder of a valid and existing patent. For instance, you can send a cease and desist letter to the seller, in which you would also include the necessary information enumerated in making the report to Amazon. Additionally, you may want to specify what you want done by the infringer, as well as the deadline within which he or she must comply.

If all else fails, patent litigation is another option. It is noted, however, that this measure could be quite demanding, in terms of time and financial resources. Thus, if you are a patent owner or holder, while you do have the right to file an infringement claim before the courts, you should consider these other processes outlined in the article first before resorting to a long and costly remedy which is the judicial action.

To emphasize, patent holders are intellectual property owners. This means that such individuals or entities enjoy exclusive rights over the subject intellectual property, including, specifically, the right to exclude others from commercially making, distributing, selling, and importing the patented invention for the period in which the same is protected by the patent.

If you discover that your patent rights are being violated on Amazon, know that there are remedies available to enforce your rights on the platform. As discussed above, Amazon has internal procedures in place to protect intellectual property owners against third-party retailers.

However, it is important to emphasize that while there are processes implemented, it is you, fundamentally, who is responsible for safeguarding your own brand or business against infringement. To help you effectively detect and remove Amazon patent infringement, see how you can automate your patent enforcement on Amazon using Red Points’ Amazon Brand Protection Services.

Read more about the software or request a demo today. 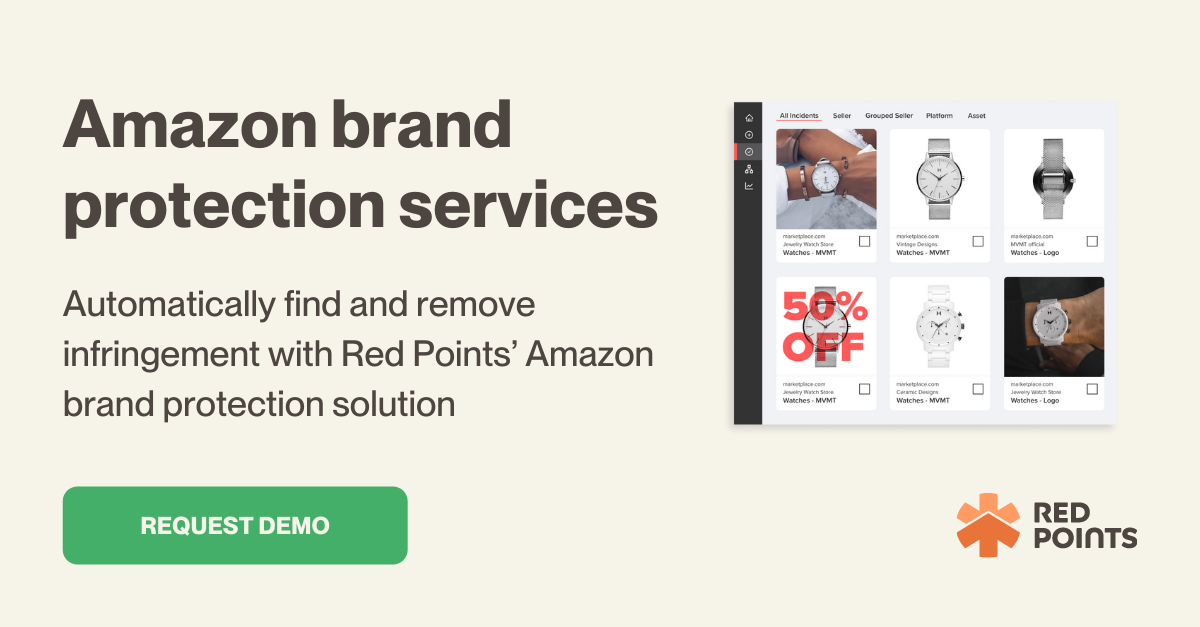 Anna is a lawyer from the Philippines who specializes in Intellectual Property and brand protection. While completing her Juris Doctor degree at a top university in her country, she worked as a legal content writer for US-based law firms.
More about this author Today, bad actors are using every tool at their disposal to commit brand abuse and…

Amazon is considered one of the biggest international e-commerce companies. By 2020, it was considered…

Counterfeiting isn’t a new problem. In fact, the companies selling fake goods have been around…