Influencers and counterfeits: A growing issue

CHECK OUT THE SOCIAL MEDIA PROTECTION PLAN AVAILABLE FOR YOU

Many influencers partner with legitimate brands to promote genuine products, but some choose another path. Unfortunately, influencers and counterfeits can go hand in hand: counterfeits are easy to come by, suppliers are eager to move products, and followers purchase anything their trusted influencer promotes.

For some influencers, it doesn’t matter what they promote as long as they benefit from the partnership. In this article, we’ll take a look at the different ways influencers can erode brand reputation and what brands can do about it.

Influencer marketing has become an effective way for brands to promote their products. According to Influencer Marketing Hub, the average campaign returns $5.78 for every dollar spent. Because of that, the influencer marketing industry has grown by at least 50% every year since 2016. It’s estimated to be worth $9.7 billion in 2020.

Can you think of another industry growing that fast? People clearly trust influencers and make purchases based on their recommendations. The downside is when those recommendations lead to counterfeit products. People who follow influencers tend to think of influencers more like friends or acquaintances rather than advertisers. Social media brings a feeling of community to shopping, and that’s powerful.

A 2019 study by analytics firm Ghost Data found that over 15% of posts with branded and commercial hashtags led to counterfeit products. And in 2016, the OECD found that leather goods, clothing, and footwear account for over half of all counterfeit seizures. Advertising these types of products is easy on visual platforms like Instagram and TikTok.

To the budding brand, fake influencers are another thing to watch out for. Followers are extremely easy to buy, and many brands have wasted thousands of dollars on “influencers” with audiences made up of bots and fake accounts.

Amazon’s Lawsuit Against Influencers and Counterfeits

On November 12, 2020, Amazon announced a lawsuit against 13 bad actors who were using social media to promote fake sales. The problem wasn’t just that they were selling fake products on Amazon. They were using generic sales pages on Amazon as fronts to sell other fake products that were advertised on social media.

If people followed the Amazon link, they would see the generic item. When they made a purchase, they would get the counterfeit luxury item. In this way, the counterfeiters evaded Amazon’s detection algorithms since they never put a picture of a name-brand item on the site.

This scheme shows how powerful influencers can be. Their followers trusted that they were going to receive a knockoff luxury item instead of whatever generic product was on the Amazon page. The listings on Amazon weren’t meant to bring in any shoppers from the site or searchers on Google. They were specifically targeting the fans of these influencers.

The situation gets worse. Last year, a prank show on the BBC titled Blindboy Undestroys the World tricked three popular influencers into promoting a drink containing cyanide. Don’t worry, the drink was fake.

The influencers all read through a script on camera which mentioned the deadly ingredient, though they didn’t seem to notice. One even confessed she doesn’t try half the things she promotes, and her agent said that’s a common practice in the industry. After they found out what the ingredient was, they all denounced the product, but it’s clear no one did any investigating beforehand.

These results are certainly alarming. How easy is it for a successful counterfeit operation to buy influencer ads without sending them any products? Pretty easy.

Unfortunately, many influencers don’t understand the ramifications of selling counterfeit products, or that it is even illegal. Besides being low quality or even hazardous, counterfeits cost jobs and can fund organized crime, including terrorism.

What Brands Can Do

With advances in technology, it’s possible for brands to take control and prevent influencers from selling counterfeit products on social media. Brands can use a trademark investigation service to monitor hashtags related to their products and keep an eye out for fakes, for example. When posts don’t use related hashtags, image recognition software can still pick up on your protected designs and logos in public posts.

If you’ve found counterfeit products on Instagram, there are things you can do. Check out our Guide to brand protection on social media to learn how to protect your IP on the social media app. 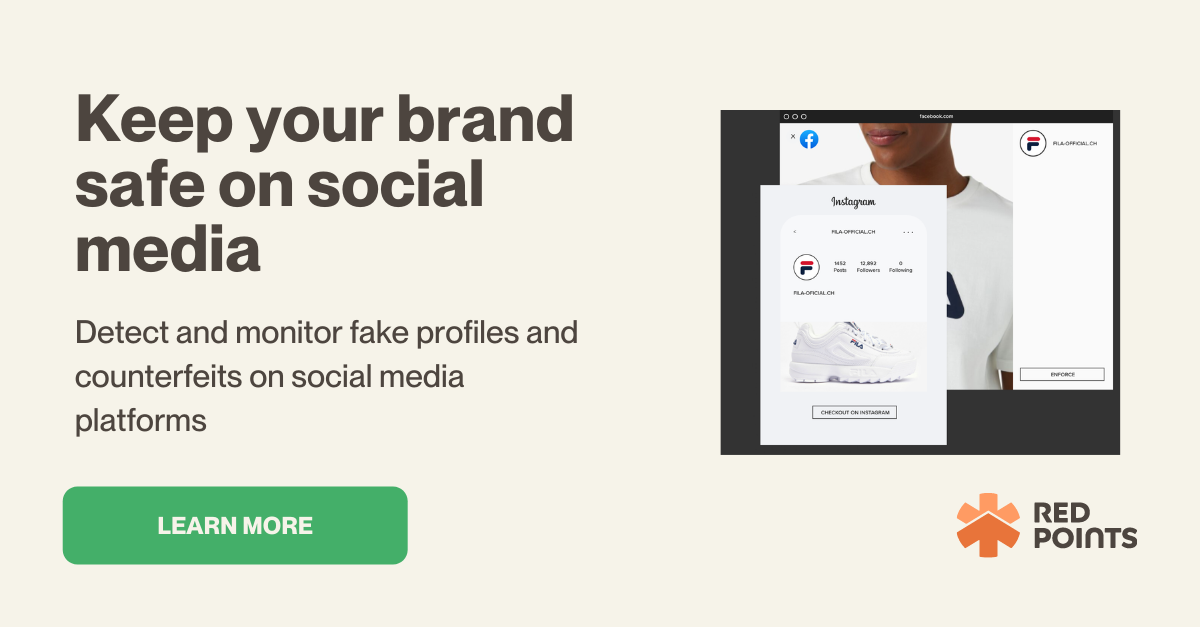 With a global recession triggered by COVID-19, many small and midsize businesses (SMBs) are struggling…

This article takes a look at the world of counterfeit beauty products, and reviews research…

How To's
3 mins
How to remove counterfeits from Instagram

Have you found counterfeits on Instagram? Is someone stealing your designs or your creative works?…