What are the economic effects of counterfeit goods?

This article looks at the wider economic impacts caused by high levels of counterfeiting, and how these impacts negatively affect all levels of society.

The potential for physical harm to consumers, accidental or intentional, of counterfeit goods is clear. The results can be devastating, heartbreaking and even fatal. The physical dangers of counterfeits have been covered in previous Red Points articles. Similarly, the damage counterfeiting causes to legitimate brands is unquestionable. This analysis looks instead at broad national and global economic impacts of this illegal industry, and attempts to bring light to the range of harms caused by illegal counterfeiting.

A key reason society suffers from the presence of counterfeiting is the lost potential tax revenue. A group of people working within a sector of organised crime such as counterfeiting is extremely unlikely to declare earnings of their illegal enterprise to the government.

The amount of sales tax that nations lose out on globally each year is estimated to be from $70bn to $89bn, with an additional loss of $8bn to $22bn from other taxes. This is money that could be going into hospitals, roads and schools in order to keep citizens healthy, to facilitate economic growth in a country and to promote education and future innovation, but which instead finds itself in the hands of criminal organisations.

Organised criminal groups very rarely operate in isolation, successful ones typically have the support of other groups providing an array of illegal services. Expansive criminal networks are formed that offer numerous services and products illegally, helping to uphold and protect interconnected criminality worldwide. Counterfeiting especially has a close connection to other forms of criminality, in large part due to the organisation and network support required to sustain these operations.

A prime example of this is the cartel-run mining operation discovered in Mexico in 2013, working to extract iron ore. The ore was being bought up by and exported to the world’s counterfeit production hub, China, as demand for the material in the country has grown exponentially in recent years to match their skyrocketing manufacturing. 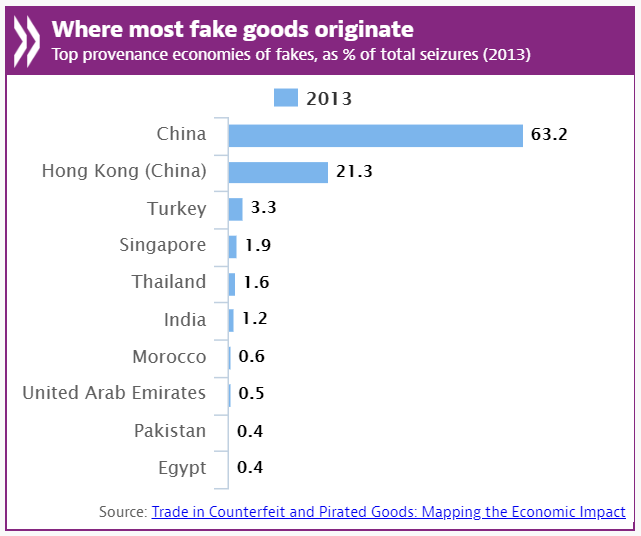 This illegal operation relied on illegal shipping to be able to move the product, a manufacturer willing to purchase illegally-sourced resources, and was overseen by Mexican cartels. These cartels are part of extremely wide-ranging networks, starting from drug-smuggling and extortion to now working in oil theft, pirated goods, and a range of other activities.

The effects of counterfeiting are not just seen from annual financial reports and through tax estimates. Direct negative effects are experienced by a huge amount of people, and loss of employment is one of the most disruptive things that can happen to an individual.

According to recent studies, the loss of global employment caused by counterfeiting was estimated at 2.5 million jobs, with 300,000 jobs being lost each year in Europe alone. As the counterfeiting industry continues to grow steadily, a further 5 million jobs are predicted to have been displaced by 2022. While the people previously occupying these jobs go out to look for new employment, an estimated 160,000 fail to find any type of new employment. Many of the luckier ones who manage to land a replacement job find themselves earning noticeably less than before. Finally, many workers, upon losing legitimate employment, elect to join the counterfeiting industry in search of employment, an industry functioning without regulations, workers’ rights or safety protocols.

Having a system of IP which is not protected and upheld by the government means there is a greatly reduced benefit to creating new goods. If simply reproducing the designs of others and undercutting them on price is permitted, or at least easy to get away with without fear of punishment, then people are incentivised to infringe on IP, instead of designing creative new products.

Inventor Shane Chen’s story is a prime example. Having first patented his design for the hoverboard in 2011, the designs were copied almost immediately by counterfeiters, who flooded the market with cheap replica products. At the height of their popularity in 2015, the USA saw 2.5 million sales of hoverboards, of which Chen saw almost zero due to the widespread counterfeiting of his patent. These sales could have provided Chen with a $300 million revenue company even at conservative estimates. However, profits from these sales are going into the hands of counterfeiters, and in turn to other forms of criminals. Imagine if inventors such as Chen were rewarded for their innovation; a large company would have provided high-quality jobs, tax revenue and been pushing technological growth. The lack of IP protection is a terrible influence on society and the economy, making everyone, not just the inventor, net losers.

Higher levels of counterfeiting in a country have a clear detrimental effect on foreign investment. Companies operating in IPR-sensitive industries, that is to say sectors which are influenced greatly by the presence of counterfeiting, are especially deterred from investing in countries with poor IP enforcement.

A paper published by the National Bureau of Economic Research, measures the impact of counterfeiting on foreign investment by the drop in exports. The research looks specifically at industries which are particularly sensitive to changes in IP rights in countries with high levels of counterfeiting. The resulting reduction in investment due to counterfeiting is estimated at $111BN annually, or a 5% reduction in exports from these countries and sectors. The same study found that nations can expect to see a 20% increase in exports by enforcing IP rights more strictly.

The reasons for this are clear. What company wants to spend money on research and development, design, manufacture etc, if they know that any new products they develop and manufacture are going to be ripped off by counterfeiters, with no response or protections from governing bodies?

The impacts of counterfeiting are clearly negative, and strong actions against the industry need to be taken sooner rather than later. The growth year on year is staggering: the counterfeiting trade was worth $461bn in 2013, and is predicted to reach $991bn in 2022. As this illegal production continues, the consequences discussed in this article will only become more compounded and affect more people in a more tangible way. It’s important for people to be aware, not only of the counterfeiting trade itself, but the ripple effects it causes, corrupting and damaging all levels of society as it becomes a larger force in the world.