Online infringement and counterfeit items are a problem that threatens legitimate brands on just about every ecommerce market available to consumers. However, trends in recent years are showing a particularly large piracy challenge on some emerging ecommerce marketplaces.

The U.S. Trade Representative Office’s 2021 report covering the top marketplaces for piracy included several marketplaces that had already been identified in previous reports. These marketplaces “failed to address the stated concerns,” according to the report, and continue to have mass amounts of piracy within their platforms (USTPO).

Despite their efforts to eradicate piracy on their platforms, Shopee, Lazada, and Bukalapak remain three of the marketplaces targeted the most by pirates.

Headquartered in Singapore, Shopee is currently one of the largest Southeastern Asian ecommerce marketplaces. As with most widely popular marketplaces, Shopee has a large piracy problem that has landed them on the USPTO’s aforementioned notorious marketer report.

While Shopee began selling in Singapore, Malaysia, and Indonesia, the platform has grown quickly and now sells to multiple markets outside of Asia.

There are 2 main types of copyright violations on Shopee: counterfeiting and software infringement.

Counterfeit items are a major issue for most marketplaces and Shopee is no exception. A common way for bad actors to target companies is to use their image to promote knockoff listings. So even if brands don’t currently sell in Southeastern Asian markets, their products can still be counterfeited. This can lead to considerable damages to a brand’s image and overtime can impact revenue.

The other piracy issue on Shopee is the sale of illegal access to software and subscription platforms. Often, bad actors sell cheap product keys using the term ‘lifetime subscription’ to digital assets such as Microsoft software and Netflix. Though the platform is committed to removing these illegal listings, software owners should always keep an eye on this kind of illegitimate account sharing activity as it’s a rising piracy issue.

The popularity of Shopee has grown so much in recent years that the marketplace now has a wide global base of shoppers. No matter where your brand currently operates and sells your products, there’s a chance your products could be counterfeited on Shopee.

It is essential that brand owners monitor Shopee, as well as other top marketplaces for counterfeits to protect their revenue and business. If you have already encountered this problem, you can report it to Shopee’s help center or contact an anti-piracy service.

Bukalapak is another popular southeastern Asian marketplace headquartered in Indonesia. The large ecommerce platform has millions of sellers and are notorious for counterfeit items and digital piracy. The platform is not only listed on the notorious market list, but also the European Commission’s Counterfeit and Piracy Watch List.

Despite Bukalapak’s statement that they are strictly against any form of piracy on their platform, it remains a growing problem for consumers and brands. The EC’s watch list cites long processing times to remove reported infringements as well as minimal detection efforts as the platform’s biggest piracy pitfalls.

Even if your brand doesn’t sell physical products, it can still be targeted on Bukalapak through various forms of digital piracy. Illegal copies of movies, music, software, books, and more can be easily sold on the platform, stealing revenue from the owner. If left upon the Bukalapak, the impact of digital piracy can steal untapped revenue and damage a brand’s reputation.

Brand owners can prevent digital piracy on Bukalapak by monitoring the market closely to identify piracy as fast as possible. If you discover software infringement, illegal movie streaming, or other digital piracy on Bukalapak, report it immediately and send the seller a DMCA takedown notice. If the piracy continues, investing in an Anti Piracy service like Red Points can help.

Like Shopee, Lazada is a Southeast Asian marketplace headquartered out of Singapore and selling to various Asian markets. The platform is owned by one of the largest ecommerce corporations in the world– the Alibaba Group, who owns various other platforms notorious for piracy.

While counterfeits of physical items are a large part of the piracy problem on these marketplaces, app and software infringement also occur. Account sharing and code splitting have become a popular form of infringement that targets and threatens the revenue of software and streaming services. On Lazada, this is a threat that brands need to be aware of.

There are various accounts on Lazada selling the login information of streaming services like Netflix, who is currently losing billions in revenue to account sharing.

Tokopedia is a free C2C ecommerce platform that connects sellers and buyers. The Indonesia-based company is the third-largest marketplace in Southeast Asia. It has over 100 million monthly active users and over 9.7 million merchants on the platform. It’s also home to more than 350 million product listings and 42 digital products. Due to its function, Tokopedia does not take direct responsibility for the infringements being sold on the platform.

Tokopedia has also been listed on the U.S. Notorious market list, as well as the European Commission’s Counterfeit and Piracy Watch List. The platform is alleged to have a great volume of counterfeits, pirated textbooks, and other pirated assets.

Tokopedia is not only targeted by counterfeiters, but it has also been a target of illegal software sharing and subscription-based online services. By searching terms such as ‘software’, or ‘premium account’, people will be misled into thinking that for about $5, they will have ‘lifetime’ access to VPN, Dropbox, Deezer…

Despite the effort and legal claim made by the platform, right owners find the takedown request on Tokopedia not efficient and traceable. The return on time investment is just not paid off with the manual detection and removal of every infringement.

The illegal share of software and subscription-based services goes down to the intellectual property violation issue. Right owners should stop infringers and claim back their rights, but manually filing takedown requests on ecommerce platforms is not a scalable solution. This is where bot-powered infringement search and scalable takedown solutions like Red Points come in. With the technology in place, right owners can automatically find and remove software or entertainment logins that are being resold online.

It’s essential for brand owners to closely monitor each of these marketplaces for piracy and infringement to ensure their IP is protected. This is no simple task, though; simply monitoring for these infringements can be more than a full-time job. But, if your brand is already losing revenue to digital piracy, this isn’t a problem your brand can afford to ignore. With Red Points’ automated infringement monitoring software, you can easily scan for and remove piracy on marketplaces like Shopee, Lazada, and Bukalapak. See how you can eliminate piracy on marketplaces with Red Points. 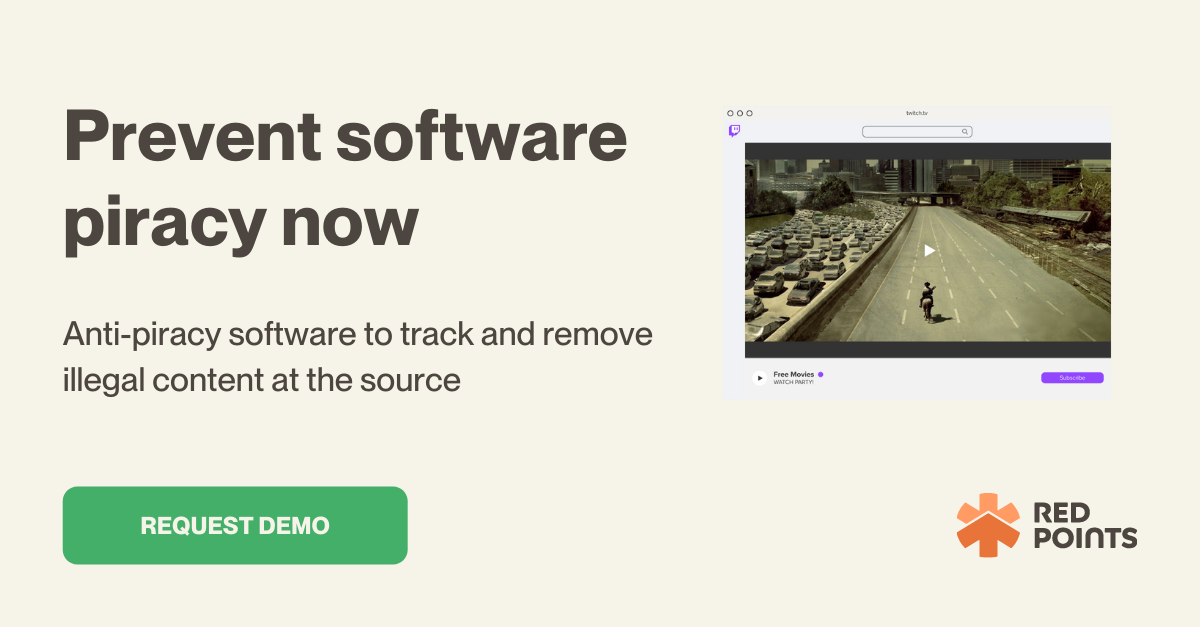 An experienced storyteller with a strong understanding of brand awareness and intellectual property, Jordan brings over 5 years of experience creating well researched content for brands.
More about this author

How To's
3 mins
How to prevent digital piracy

What is digital piracy? Digital piracy occurs when scammers and internet users illegally copy and…

Piracy
3 mins
What is the impact of piracy on businesses

We will look at the impact of piracy on the economy, customer experience, brand image,…