CHECK OUT THE SOCIAL MEDIA PROTECTION PLAN AVAILABLE FOR YOU

More than 51 percent of Facebook users have purchased either products or services on the platform, making Facebook the most preferred social media platform to make purchases.

However, the wide popularity of Facebook among both brands and consumers has also made it a hot spot for scammers.

According to a report, Facebook blocked over 1.3 billion fake accounts in just two months – between October and December 2020. For context, the number of active users on Facebook amounts to around 2.93 million.

There can be several reasons behind people creating fake accounts on Facebook, including:

With the launch of Facebook’s Marketplace and other eCommerce features, the social media platform has become a favorite for scammers to sell counterfeit products.

Bad actors can create fake pages of a brand by copying all the contents from the original page to deceive customers and sell them inauthentic/ fake products.

To target more people, bad actors even launch aggressive advertising campaigns targeting unsuspecting customers and redirecting them to a fake website outside of the social media platform that looks just like the original website but sells cheap quality counterfeits instead.

They can also sell counterfeits directly on Facebook by using original product images and descriptions to trick customers.

Bad actors may not always be trying to sell a fake product through Facebook. Sometimes they have no product with them at all, instead, their goal is to obtain customer information or data through phishing.

Just like in the case of counterfeits, bad actors can create fake impersonated websites to trick customers into placing orders and steal their personal information including their phone number, email address, or banking details.

There are also other scams on Facebook initiated by fake accounts which are not carried out by impersonating a third party. These include:

Scammers share non-existent coupons or deals that are just too good to be true. In most cases, customers are urged to download a mobile app in order to get access to coupons or discounts. However, as soon as they download the app, malware gets downloaded on their device which can effectively extract confidential information and send it directly to the scammers.

“You have won” scams

Sometimes scammers pose as big brands or even celebrities to claim that you have won a prize – A prize that is way too irresistible to ignore. While some scammers may ask you to pay shipping costs for ‘this prize’ that doesn’t exist, others may only ask you to scan a QR code which would lead to a fake website or mobile app.

Scammers can send suspicious links to you through DMs and as soon as you click on them, you could end up losing access to your account. That means scammers can use your very genuine brand account to impersonate you and sell counterfeit products or initiate phishing attacks on your followers.

Fake Facebook accounts usually don’t have consistent information in them like personal contact details or other personal records. In some cases, the accounts may even have an attractive profile picture of someone with no detailed information about where they are from or what they do.

Even if the Facebook account has a lot of images, the scammer may just be using stock images or stolen images to trick people. You should always check through the album to look for any inconsistencies or stock image watermarks.

Another way to identify a fake account on Facebook is by checking the user activity rate. How many posts have they put up recently? What is the average number of likes and comments on the post? Do they have a large number of friends added to their list but hardly any interactions or engagement?

If you have received a friend request from an account you don’t recognize, you can also check if there are any mutual friends in order to confirm their authenticity.

Too eager to sell something

If a considerably new or unknown Facebook account has recently contacted you and they are too eager to sell you something, it may be a fake Facebook account trying to sell counterfeits or steal your private information. It’s important to always do your due diligence and never click on any kind of suspicious links shared with you.

3- Click on the three dots present near the cover photo.

5- Select ‘Pretending to be someone else’ if the account is impersonating a person or a brand.

Choose ‘Spam or harmful’ if the account has posted spam content or they are trying to scam you. You can also just select ‘Not using a real name’ if you are sure the profile is fake but they haven’t tried to scam you in any way yet.

Here are the steps for reporting a fake Facebook page

2- Search and open the fake Facebook page (You can also directly search the page by its name).

3- Click on the three dots present near the cover photo and select ‘Report page’.

Establishing your brand presence online and building trust among prospective customers isn’t an easy task. When bad actors create fake profiles or pages on Facebook for counterfeiting, impersonation, piracy, or other malicious reasons, it can directly affect your brand reputation and customer experience.

Red Points can help you stay protected on social media by detecting fake profiles and even fake pages selling counterfeits online. The software can request takedowns instantly and also evaluate the economic impact of these pages.

See how you can protect your brand on social media with Red Points. 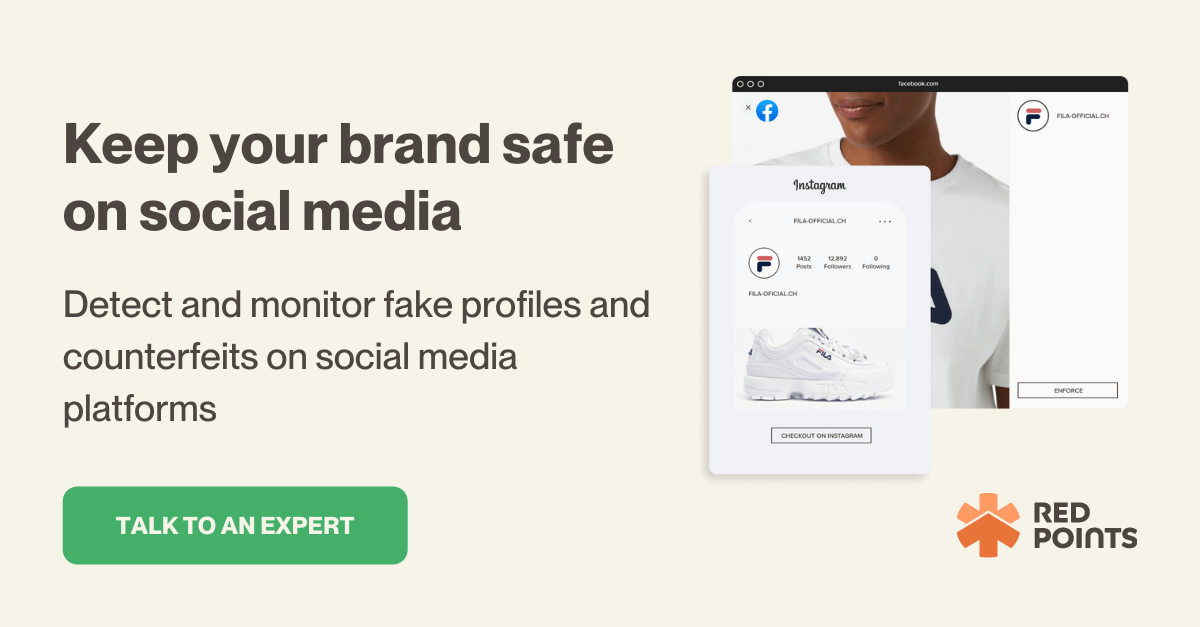 Facebook is one of the largest social media platforms out there with more than 2.85…

Infringers have never been more active on social media platforms than today. In 2021, US…